“As long as I was old enough to go out and mingle, people been side- showin. Every weekend there’s a sideshow somewhere. Every club, every event, somebody gonna start a sideshow.” – Mac Dre, Bay Area Rap Legend

sideshow (sid-sho) n. A spontaneous street gathering in which young people perform wild car maneuvers, including spinning donuts and figure eights, while spectators cheer them on.

Sideshow culture is related closely to the Hyphy rap movement, which originated in the Bay Area, and is full of unique terminology that is used to describe its activities. “Ghost-riding the whip” brought this movement into the limelight nationally in 2005.

The gatherings are considered illegal, and the Oakland police spent several years trying to shut them down. At the peak of sideshow activity in the mid-2000’s the police and the state promoted all types of legislation to criminalize spectators at vaguely defined sideshow gatherings.

For the police, this criminalization of “sideshow activity” is justified in order to better target social gatherings that they otherwise would have no chance of stopping. In a city with an average of well over 100 homicides per year for the past six years running, sideshows are an easy scapegoat for violence that routine policing never diminishes.

As night fell on January 7th 2009, the cast of kids in the streets rotated as the clashes moved, much in the way that young people in Oakland were accustomed to by their participation in sideshows during the previous decade. People moved in groups, hollered out when they saw cops, and used cell phones to spread the word about where to meet up next and where to avoid.

It’s mobile. If it’s occurring at High and Foothill, and we go there, they simply get in their cars and go to another location where we’re not. We can’t be everywhere.

It’s 3:18 [am] but now the sideshows fittin to start up… we got everybody gatherin in one central location. Everybody gettin together, that’s what the sideshow is all about.

All he’s doin is swingin his car, know what i’m saying… He ain’t killin nobody. See him killin somebody? All he doin is swinging. And leaving, see him leavin? He gone. 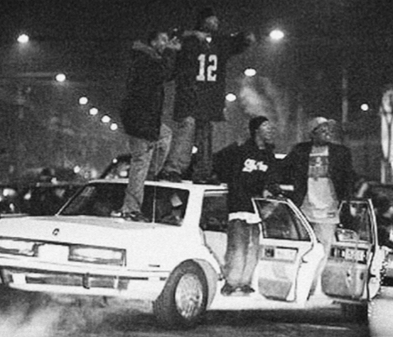